Syrian refugees in the unofficial settlement in Ghazed, Lebanon November 2017

The war in Syria batters
the environments of neighboring countries

The rapid population growth in Jordan and Lebanon that has followed the Syrian crisis has driven these smaller countries to the brink of a full-blown environmental crisis. However, governments and NGO’s are seeking solutions, some of which have already been successfully implemented.

The war in Syria has caused the biggest refugee crisis in the world. During the eight years of conflict, almost 12 million people have fled from their homes, 6 million of which are internally displaced and the rest have gone across the border.

One million refugees have sought asylum in Europe. The figure is relatively small, since the majority of the Syrian refugees have ended up in the neighbouring countries Turkey, Lebanon and Jordan. Lebanon alone has received one million of the total. The same goes for Jordan, where the official number of Syrian refugees is 660 000, but various organizations operating in the country estimate the number to be closer to a million. Europe has closed its borders and Middle Eastern countries are trying to cope by themselves with the massive amount of people in need of shelter.

In addition to the humanitarian costs of the crisis, the environment is a major victim of the war in Syria. Lebanon and Jordan were already struggling before the conflict started. Now the receiving communities have to take care of millions of new residents with resources and infrastructure that were not sufficient enough to begin with. Meeting this growing need has proven to be an almost impossible and a very expensive task. The international community has taken part in sharing the costs, but it is not enough. In just a few years, the rapid population growth has driven Jordan and Lebanon to the edge of an environmental crisis.

Jordan is a small country, approximately the size of Austria or Portugal, consisting mostly of a desert climate and environment. Due to its geographical location, the country suffers from acute water scarcity and a lack of natural resources. Jordan used to pump water from the Syrian side, but that option was lost after the war broke out. In addition, the 660 000 registered Syrian refugees in Jordan are straining local resources significantly more than before.

And it is not only Syrian refugees. There are also people from Palestine, Iraq and Yemen who have sought a safe haven in the country. According to the official estimate, there are 3 million foreigners living in Jordan, in addition to the 6.5 million Jordanians.

Water, or rather the lack of it, is the hottest topic in Jordan. Mohamad Afana from the Ministry of Environment of Jordan says that the country is pumping groundwaters twice as fast as it renews. He estimates there is enough groundwater for only ten more years. In just five years the water shortage will start to take a heavy toll on the country.

“The Syrian crisis has pushed us to the point where Jordan has become the water-poorest country on earth. The situation is impossible”, Afana says.

Jordan has to solve wastewater management issues as well. Some 75 percent of wastewater is being managed, but the biggest concern lies in the wastewaters produced by industry. Around 60 percent of it is generated in regions that do not have water treatment plants.

“We estimated that 2500 cubic meters of industrial wastewater end up in Zarqa river each day. It’s a huge amount”, Afana says.

One of the biggest environmental concerns in Jordan is the fate of the Dead Sea. The drying up of the most important water supply in the region has already been a concern for decades. River Jordan, which flows to the Dead Sea, has been narrowed down to a mere creek due to extensive water usage. The surface of the Dead Sea sinks by one meter a year and Afana says it will be completely drained by 2025, unless something is done about it.

Different plans, such as a channel from the Red Sea to the Dead Sea were already proposed over ten years ago, but the plans have yet to be executed. 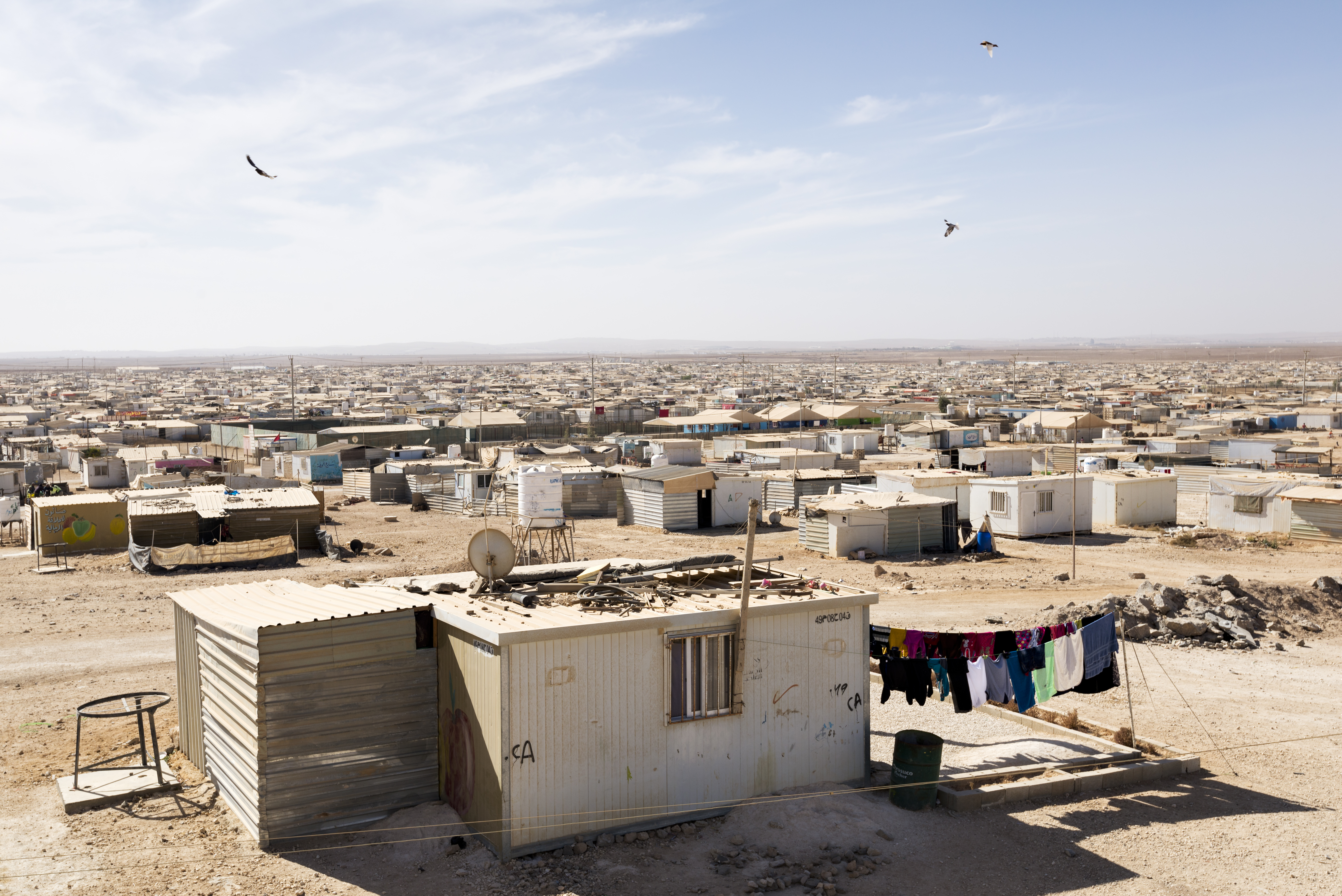 A view over Zataari refugee camp in Jordan. November 2017

Rivers of oil filled the landscape in North East Syria

Afana says that many organizations including the UN Development Programme UNDP, have tried to measure the environmental effects of the conflict, but no one has a clear picture of the overall situation.
Numbers trickle in from here and there. For example, it has been estimated that there is 30 percent more solid waste produced every year in Jordan after the start of the crisis. Since there is no efficient waste management system in the country, most of it ends up in landfills.

However, there is some good news ahead, Afana says.

“Jordan will invest in turning waste to energy in the future. It will diminish the amount of waste by 80 percent.”
Afana says the Syrian crisis costs Jordan some 2.6 billion dollars a year. A little over third of the amount is covered by international aid. Several organizations aim to work together with the state of Jordan to solve issues related to the war.
“Up until now, only a few of the donors have turned their attention to the environmental impact of the crisis”, Afana says.
“Before the war, Syria was a great country when it came to industry and agriculture. In that sense, I don’t think it’s a bad thing to have a lot of Syrians here. But when it comes to the environment, there’s nothing good about it. And no one knows how big the environmental effects will finally be.”

Lebanon is a small country on the Mediterranean coast, sandwiched between Syria and Israel. Lebanon was already suffering from a lack of resources before the war in Syria began. 20 years of civil war and other political crises have resulted in weak resource management systems. Now the situation with waste, water and electricity management is even worse, says coordinator Suzy Hoayek from the Ministry of Energy and Water in Lebanon.

“We’re not able to utilize sufficiently the water supplies that we have. We’ve come to the point where a lot of groundwater has been spent and it’s not renewing quickly enough”, Hoayek says.

“And now there’s a million more using the resources. The situation is not sustainable.”

When it comes to air pollution, the culprits can be found in both the traffic and the eight power plants that run with diesel and oil to produce electricity. Hoyaek says they are old and dangerous to the environment and they don’t provide sufficient amounts of energy. Lebanese are forced to compensate for the electricity shortage with private generators.

“There’s a lot of these generators and they cause a lot of health problems. To all of this you add Syrians, who compete with Jordanians for apartments, jobs and also water and electricity. Consumption levels are a million times higher. It’s like living in a massive landfill.”

Hoyaek says that in 2010, the ministry started to plan strategies to mitigate environmental problems, but the Syrian crisis has slowed the process down. There was never enough money for the projects anyhow, and now there’s even less.

“The state of Lebanon has counted that by the end of 2017 it has spent approximately 18 billion dollars to compensate for the effects of the crisis. The aid we receive is not enough to cover the costs.”

“Quite the contrary, international organization cut their aid year-on-year.” 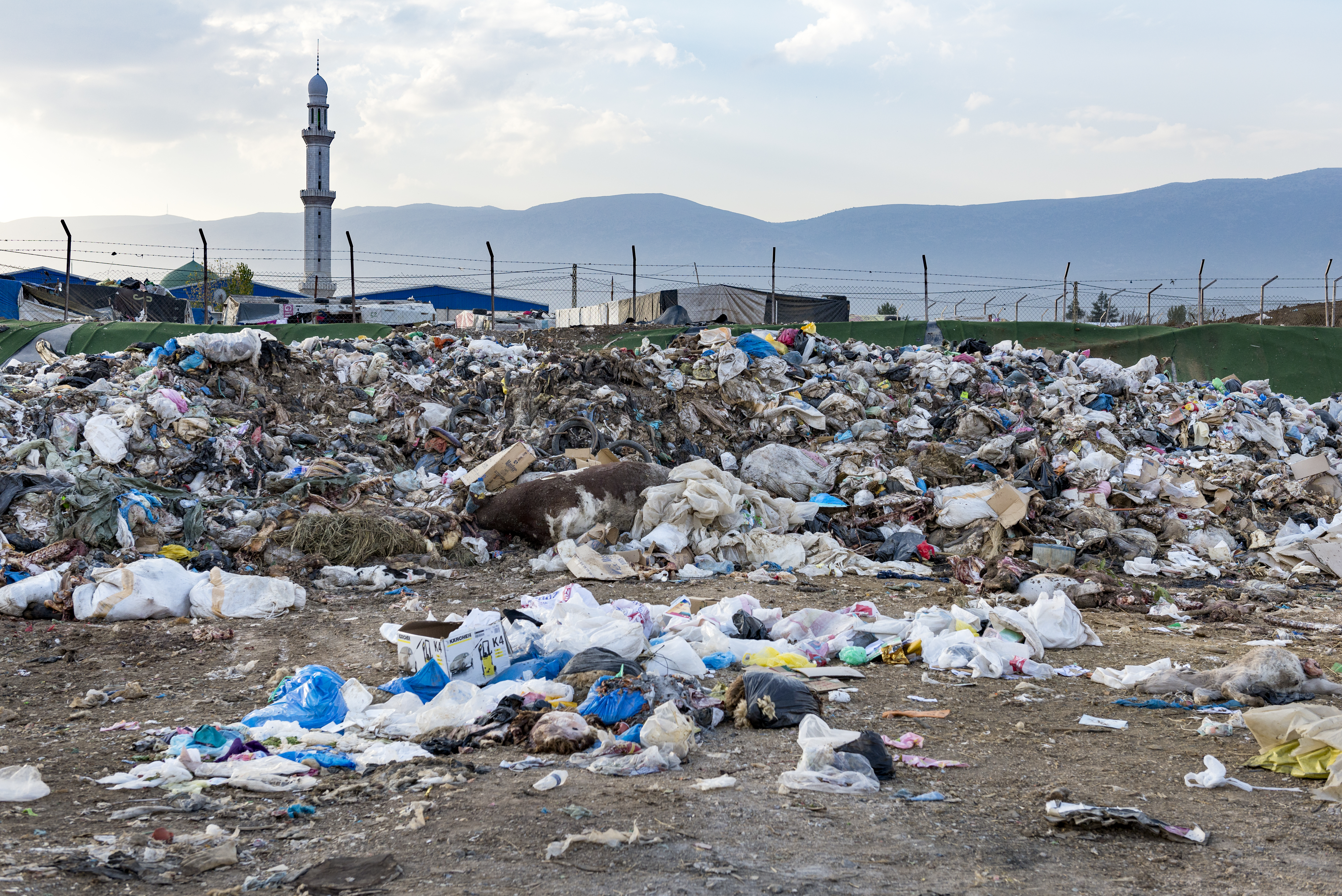 A landfill right next to a refugee camp in Ghazeh, Lebanon.

The scale of the crisis is evident in the Beqaa valley, close to the Syrian border in the small town of Ghazez. Before the war in Syria broke out, there were 6500 residents in the town. According to mayor Mohamad Hussein al Majzoub, there are now 33000 to 35000 residents in Ghazez.

Population growth has caused an acute resource crisis and problems to waste management.

Before the crisis, the waste production in the town was approximately 800 kilos per day. Now the figure is 33000 kilos. The city was forced to borrow money and rely on help from organizations to tackle the environmental crisis.

“Our town is not able to serve this amount of people.”

Half of the Syrians in Ghazez live in informal settlements at the edge of the town, next to a new landfill, recently built by the UN Development Programme UNDP. If left unmanaged, the wastewaters from the camps will pollute the soil and groundwaters.

“We used to have dead carcasses of animals all around the place, rats running around and wastewater flooding the streets. People were burning garbage under bare skies and the smoke was harming the residents”, UNDP Project Coordinator Mahmud Taleb says.

“Thanks to the new landfill, we’re now able to take most of the smells and fluids away. We also built a monitoring system, so we can oversee that the waste is transported to the landfill accordingly. We also organized a broad education campaign so that residents could minimize their waste production.”

However, Taleb says the next problem is just around the corner. As the current landfill is filled, a new one has to be built. The location should’ve already been decided months ago, but that has not happened.

Al Majzoub says that the United States Agency for International Development USAID is planning to build a water storage and power plant in the region. United Nations Development Programme UNDP is trying to tackle the electricity shortage by installing solar powered street lights in Ghazez. When it comes to waste management and building WASH-structures (water, sanitation, hygiene) in refugee camps in Lebanon, the situation is difficult.

“The state of Lebanon has forbidden the building of permanent infrastructure regarding waste management and water treatment. The reason is the fear that refugees would want to stay here permanently”, Taleb says.

The crisis that has followed the rapid population growth has forced these countries to come up with solutions. The population in Rouisset el Ballout on Mount Lebanon, north-east from Beirut, has grown by ten percent. Last year, they built a waste sorting centre in their municipality with aid from the UN Refugee Agency UNHCR. This is the very first and only one in the region and it will also  to be utilized by 70 other municipalities in the region.

“Before, all the waste from our municipality – and the others as well – ended up in the environment, polluting the groundwaters”, the mayor of Rouisset el Ballout Fadi Zeidan says.

“The state of Lebanon has no means of controling where the waste is carried and most of it ends up in nature. This project is a successful pilot that should serve as a good example for others.”

The UNHCR water and energy expert Renata Raad says the problem is not in the lack of technical skills, for there is plenty of that in Lebanon. The problem lies in funding and the lack of governance skills.

“I firmly believe that the solution lies in strengthening the capacity and know-how in our government. We have received help, but if there’s no more aid from the international community, our country will break under this burden”, Raad says.

Lebanon uses groundwaters for drinking water, but there are major issues in the water quality. Wastewaters were already a huge problem in the country before the Syrian war. Raad says that only three percent of wastewaters in the country are treated properly. There have been some attempts to fix the situation, but according to Raad, they have been insignificant in relation to the scale of the problem.

“River Beirut already became a wastewater river ages ago. The good part of all of this all is that the Syrian crisis is slowly waking us up to this situation and that it can’t go on like this”, Raad says.

“The sorting center in Rouisset El Ballout is a great example of how remarkable improvements can be achieved with relatively small costs.”