At the reception of the former hotel City Plaza, volunteers are on duty.

In Athens, as the city filled with refugees and migrants during 2016, squatting in abandoned houses became an alternative way to accommodate people with no place to go. In 2019, the new government closed down many of the squats but what happened still remains an example of solidarity, and of one the ways to react to refugee homelessness. In June 2018, our project team visited two very different squats. The hotel City Plaza, that was probably the most well-known and organised squat in the city, and one less formal Squat that had recently been opened in an empty business building.

Since then, the new government in Greece was elected in July 2019. They wanted to hear nothing more about the squats and consequently in the Summer of 2019 most of the squats were closed in a government crackdown.

This article was first published in the Finnish street paper Iso Numero (The Big Issue of Helsinki) in February 2019.

The Hotel City Plaza was squatted in 2016. Squatting was a protest against the European Union asylum policy.

The building was left empty at the beginning of the economic crisis in Greece. It was squatted in by activists in April 2016, only a month after the EU-Turkey deal to tackle the migrant crisis. Tens of thousands of people who thought they were just passing through, got stuck in Greece.
Victoria Plaza, a square close to the hotel, was filled with people sleeping in tents and in the open air. Most of these people had been planning to stay for only a night or two. The refugee camps were overcrowded.
“Protesting wasn’t enough anymore. We wanted to create an example of an alternative to camps, and suggest different ways to live together”, says Nasim L, who has been an activist for a long time and involved in City Plaza from the beginning.
City Plaza is a a good example of cohabiting peacefully. The enthusiasm of volunteers and residents is infectious. Turnover rates are low, and many are on the waiting list to get a place. In this former hotel, living conditions are much better than in many other squats, many of which are old office buildings.
“I don’t know where I would have gone if there wasn’t City Plaza. Food is free, we have our own rooms and showers. I love the place”, says young Syrian named Hasan who came to the Greek islands as an asylum seeker and is now in Athens, waiting for a decision on his status.
In this house, everything is done together: cleaning, cooking, safety, language courses, babysitting and medical care. There is a list with shifts on the wall, to remind you when it is your turn to participate. Those who work in the kitchen cook about 800 meals a day. The things that need to be bought are paid for with donations.
Volunteers emphasized that it’s important that in every task, there are people from different backgrounds, different countries and different situations in order to create unity and enhance cooperation.  All of the residents that have a refugee background are not homeless. Everyone has their own reason to come to City Plaza and legal status is not an issue.

The small yard of the hotel was used as a recreation space for the children as well as cooperation meetings.

Pictures of demonstrations decorate the lobby of the Plaza hotel and are a reminder of the sounds of solidarity from 2016.

International and Greek volunteers, and refugees participate in the upkeep of the space as equals. Some of the volunteers also live under the same roof. The slogan of City Plaza is “We live together, we fight together”.
“We wanted to show that this is possible without people being treated like animals. At the refugee camps, people are not allowed to participate in anything or feel useful,” says Coral, a Spanish volunteer who have been in City Plaza for almost a year.
City Plaza might be the most famous squat, but it was definitely not the only one in Athens. According to Nasim, at most Athens had 18 houses seized by asylum seekers. They hosted up to 2,500 people. In 2018 there were about 10 of them left and some residents had got a negative answer for the asylum application and been evicted.
However, not every squat is, or is even trying to be, as idyllic as City Plaza. Typically, they are established in empty office buildings.

The former office building in Athens has recently been squatted in and it now serves as a humble home to dozens of migrants and refugees.

To get in, you need to slide under a metal net which covers the door, and then get past piles of random furniture and trash. There is a note on the elevator door that says, with a smiley: “still not working, use the stairs”. The toilets upstairs are flooding. 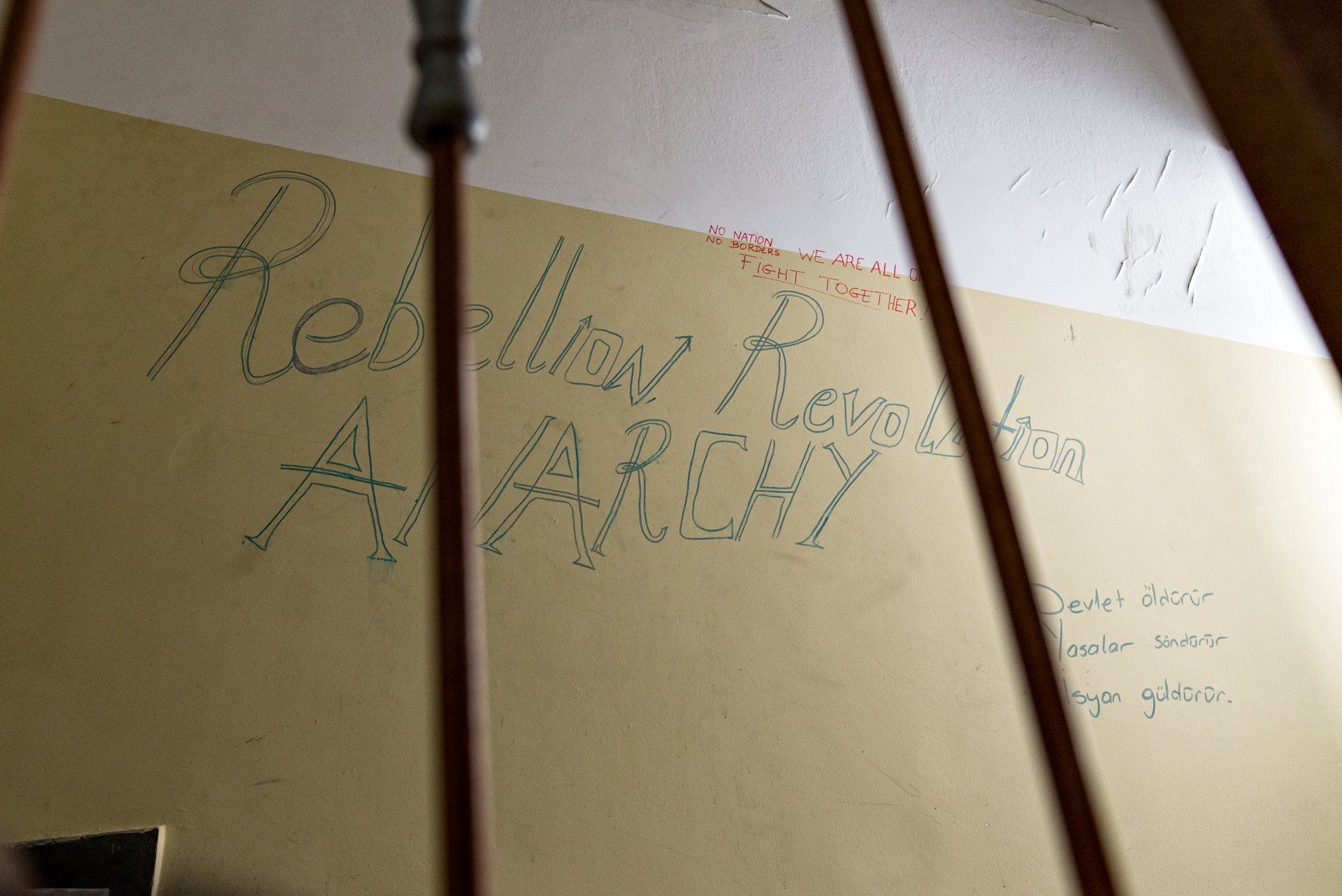 The walls of the building corridors are like a statement of freedom or an insight into the mind of the city’s underground world.

“I’m not 100% satisfied, but after all, it is a roof over my head”, says a young Kurdish man Kadir, staying at the squat.
This office was squatted in only a few weeks ago, but there are already a lot of people, mainly people who have no residence permit in Greece, or refugees waiting for an opportunity to leave. Most of the latter want to go and apply for asylum or work elsewhere in the EU. 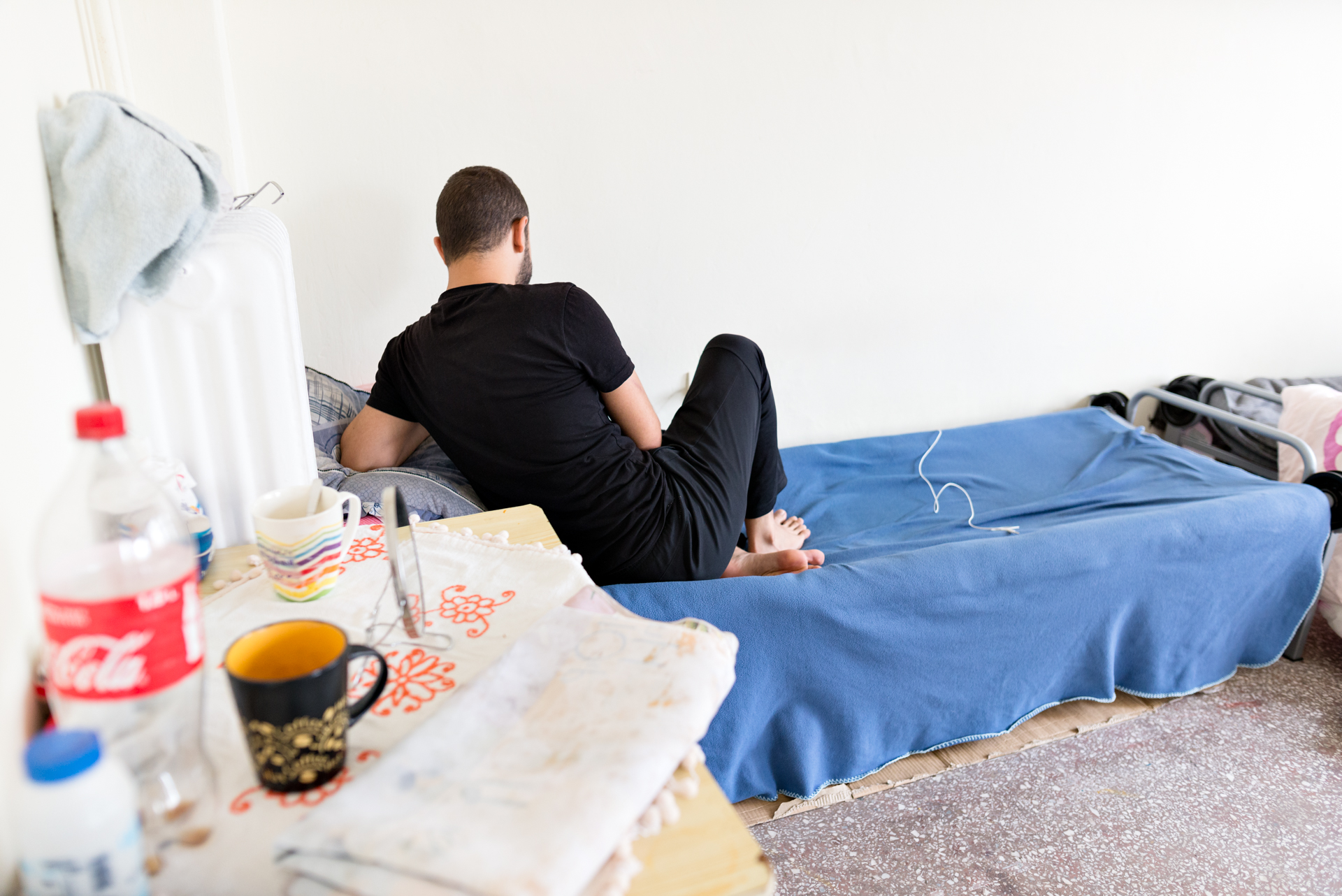 Farhad, a Kurdish refugee from Turkey, ended up in a squatted house, because he couldn’t afford the cost of a rental home.

One of the floors hosts mainly Pakistani men and above them there are three floors of Kurdish people. Men and women stay in different rooms.
“I came here only to continue somewhere else in Europe. I’m planning to go soon to Germany or Belgium”, says Yusuf, who is living in a big room with eight other residents.

Naym, Rasil, Maiz, Dildar and Waqar all live in the same room in the house, on the so-called Pakistani floor. 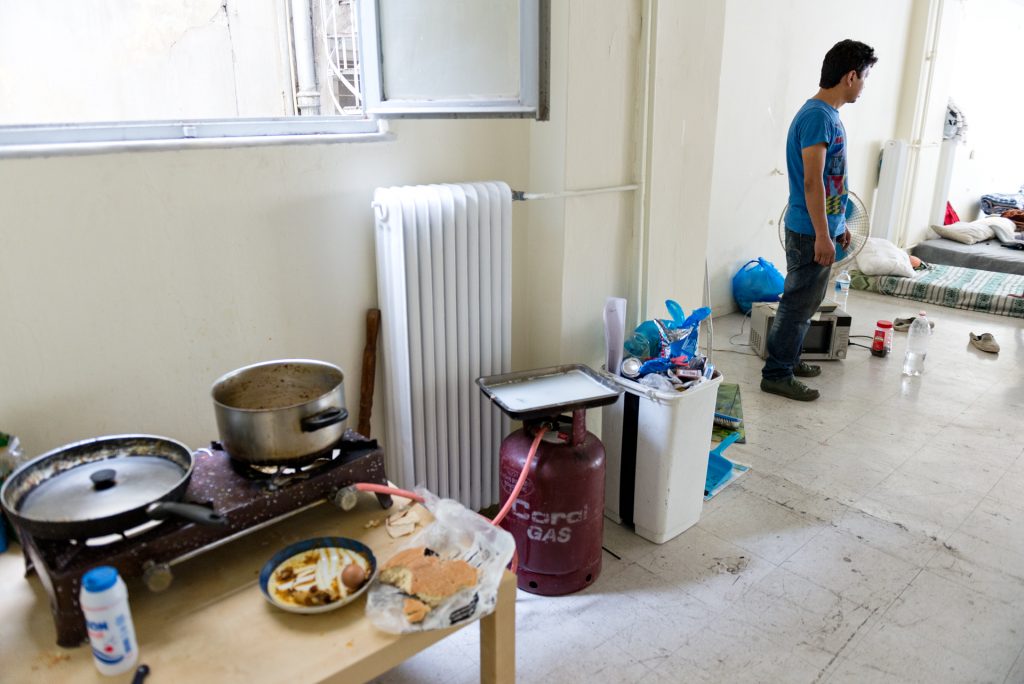 Facilities for cooking and everyday life are rather elementary but much better than staying on the streets.

He came to Greece a few weeks ago from Kurdistan for political reasons. At first he slept on the streets. This squat he found with the help of his brother’s friend. Without connections and money, you would be lost in the city.

Yusuf’s roommate Farhad tells that before coming here he lived in a shared apartment. Two of his seven roommates went to Germany and the rest couldn’t pay their rent, electricity and water bills any more. Farhad found this squat with his friend.

“We need to stay together. In Athens, we cannot trust anyone”.

Nobody knows the exact number of homeless refugees or immigrants in Greece. Although the number of people on the street had decreased from the peak years 2015 and 2016, however in 2018 it is still a visible part of Athens’ streets. There are no more tents in Victoria Square – but blankets and sleeping bags, yes. Many were forced to sleep in the open air for months.

There are many reasons why refugees and migrants end up on the streets. Some don’t want to seek asylum from Greece because they are planning to move on. Some are not able to live in the camps. Some are paperless and some are looking for a job instead of asylum.

Unfortunately, some will be left without a place to stay when they get the status of refugee because they need to leave the refugee camps.

The squatters have sought not only to offer practical solutions to the problem, but also provide alternatives to isolating people in camps far away from local communities. Nasim from City Plaza says that all of Greece’s 60,000 plus refugees would fit in Athens, a city of 5 million people, without any trouble.

“In a city with 4,000 empty public buildings, people could be living differently and there wouldn’t be the need for the horrible camps”.

“The point isn’t that people couldn’t be hosted in better conditions than now. But rather that they want to put people in camps. It is an attempt to make refugees invisible and hide them out of sight, away from the cities”. 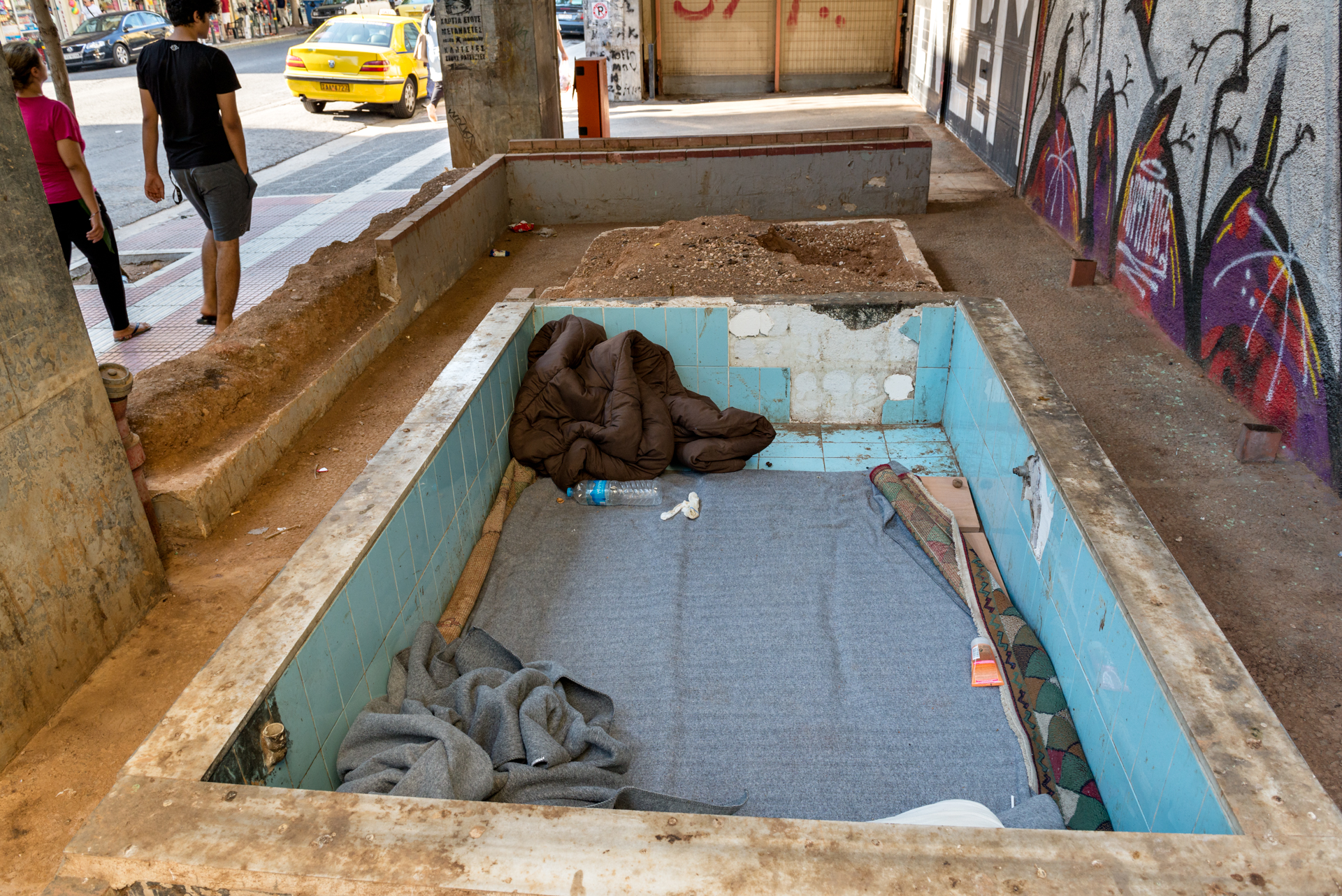 In Athens, as the city filled with refugees and migrants during 2016, many had to sleep on streets and parks in the open air.

However, not everyone has welcomed the squats. Many of these buildings, including City Plaza, are located in areas where poverty and social problems are common.
Activists of City Plaza emphasize that they want to give an example – that living together is possible, and getting to know “the others” will also diminish anxiety and fear. This is why they have also been seeking dialogue with the local community. People in this area have been invited to discussions and celebrations. According to Nasim, many of the people who were previously worried about refugees coming to the area and the hotel, now come over and bring donations of toilet paper, sugar or pasta for the residents.
“It doesn’t solve our needs, but shows that people have started to understand something about the residents. At least it reduces the type of thinking that puts poor people against other poor people”, says Nasim.
The warmest memory he has is of a woman in the neighboring house. On the first day of squatting, she threw everything she could get her hands on from her balcony, including chairs, at the squatters.
“But last Easter we held a common celebration in the streets for our residents. Then she threw chocolate from the balcony for the children. So there is hope, I have seen it with my own eyes”.
Epilogue
City Plaza was closed voluntarily in July 2019 because of a lack of material resources and commitment in demanding circumstances. In its 36 months, City Plaza hosted over 2,500 refugees from 15 different countries. According to the volunteers the remaining residents living in City Plaza were moved to safe rented housing paid for with donations within the city.
For the approximately 40 former residents that did not have a place to go to, City Plaza was replaced by a 7-apartment house named p.a.l.m.i.e.r – rented in the center of Athens.
Many of the squats in Athens were closed in 2019.
A comment from the project leader
In a crisis situation that rapidly develops, the use of existing but empty or available houses and office buildings for accommodating refugees is environmentally safer than camps that are quickly rigged up and frequently do not yet have the proper facilities in place. Existing buildings are usually already connected to water and wastewater networks, and waste collection systems. This saves construction costs and diminishes other possible adverse environmental effects like the illegal dumping of waste.
In Greece there is an example of a system that is focused on providing refugees with urban accommodation called Emergency Support to Integration and Accommodation programme (ESTIA). This system is built with the cooperation between the UNHCR, the Greek Government, local authorities and NGOs.